Ken No Shoji: A Manual (read the instructions before playing!)

Your name is Choop. You are a brave sun conure whose life is dedicated to fighting evil. You also have a laser gun, which is pretty great.

Unfortunately, in the dark of the night, an evil power stole your flight feathers. You can hop and run, but you can no longer fly. Even worse, this power put the flight feathers in a box on top of the highest tower in the land, a mysterious building known as Ken No Shoji. There are doors and lasers blocking your path, and you will have to risk everything to make your way to the top.

The question is not just whether you can get your feathers back. You must also be as quick as possible, for darkness reigns until you regain your power. Good luck!

1. Download both the .exe file and the data folder as a zip file.

2. Once you've downloaded it, extract/unzip the file.

3. Now you should be able to play the game!

4. Note—there's no way to quit the game aside from pressing Start, right-clicking on the game icon, and clicking 'close window.'

Ken No Shoji is a tall castle with multiple levels. The doors to each level are sealed by an electronic key. To unlock those doors, you must collect at least 16 orange keycodes on each level.

This won't be easy—not just because the codes are located on precarious platforms, but because there are enemies in your path. You'll soon find that your laser will destroy some, but not others!

Your wings are located on the highest level of the castle. Collect them, and you will have your power back! (However, it will take you a while to heal, so you won't be able to fly just yet—not in this game, at least.)

Beating the game doesn't take very long. How fast are you able to do it?

I created the levels, artwork (both the photos and the 3D models), rigging, animation, and music. Our two pet cockatiels provided the sound effects. I also put the scripts into the game, though many came from the very helpful online community. Thanks to everyone who helped me with programming when I was stuck! –Kenneth Burchfiel, 8/19/2016, Austin, TX

3. Audacity (turning MIDI files and bird sounds into sound effects and music for the game)

4. Anvil Studio (used to create the in-game music, along with an electronic keyboard for a MIDI controller)

Total cost of these programs: $0

I admit that this is not a professional-quality video game! However, as someone who was completely new to coding, game development, and 3D design as of early May 2016, I'm really happy that I was able to put this together over the past 3 months.

I am not a programmer by trade! In fact, I'm about to begin a Master of Social Work program. However, about a year and a half ago, I dusted off the N64 and started playing some of my old games, including Banjo Kazooie and Banjo Tooie (by Rare). I had never actually finished these two games, but by the time I did, I decided that BK is my favorite game of all time, and BT is amazing too. I loved the 3D platforming, the flight element, the creepy hub world of Grunty's Lair, the adorable characters (especially Kazooie), and all the collecting. (These two games were definitely the inspiration behind this little game, so special thanks to everyone at Rare who made these!)

As I played the games, I wondered to myself: how hard could it be to make a 3D platformer, or some other type of video game? People on the Internets recommended starting with 2D, saying that 3D was very complex. One person argued that it would require linear and matrix algebra. I thought about starting with 2D, but I knew it wouldn't be the same experience.

Instead, I downloaded Unity 3D, even though people warned this would be tough. I had never coded before, but I read that C# wasn't a bad place to start. While the setup was intimidating, I worked through Unity's excellent in-house tutorials (https://unity3d.com/learn/tutorials ), and soon enough I had completed the "Roll a Ball" tutorial. I then went through many of the other tutorial sets, including ones on the interface, scripting, audio, physics, and animation.

At the same time, I learned about Blender, which is an amazing program. I purchased an in-depth tutorial series, but I never got around to using it, in part because I was having so much fun with Unity. My Blender skills are still pretty poor, but I learned just enough to create buildings for the game and a little animated bird.

After creating some very basic games, I moved on to this one. I started with the level design and scripting, and didn't really pay attention to the graphics or music. (Choop was a cube for much of the development.) Scripting was a challenge at times, but I found some great tutorials that helped me out. I'm not a musician, but I was able to 'compose' a couple basic tunes using my electronic keyboard and put them into the game. For textures, I took pictures of things (or used photos I had already taken) and imported them in. For example, the 'industrial' floor is a picture from the Houston Ship Channel area, and the 'city' floor is a picture of Tokyo.

If I had worked on this nonstop, development would have been much shorter, but I had a full-time job to attend to. There were periods where I worked on it intensely, and then times where I barely touched it.

Most of the game was completed in Houston, but I put the finishing touches on it in Austin.

1. If you don't know anything about making video games, you can still make video games! They might be pretty basic (like this one), but it's still a video game that you can play and share with friends. I think this is a better time than ever to make 'homemade' games, since there are great programs like Unity and Blender that simplify the process, and just as important, there is a thriving online community that is willing to help you through the process.

2. If you want to make a 3D game, give it a try, even if you haven't even made a 2D game. Watch the Blender tutorials and learn your way around Blender.

3. Start small so that you actually finish! I had a more elaborate game planned, but I realized it would take far too long.

4. Having a team helps, but you can do each component by yourself if you watch good tutorials and have enough free time. 3D design, music, sound effects, scripting, animation, level design, and rigging are all skills that you can learn the basics of. Yes, there is a huge difference between professionals who have tons of education and experience in very specialized fields and the output of someone like me. But that's true for any kind of hobby. The nice thing about doing a game yourself is that you're forced to learn each aspect of the process.

5. Creating a game gives you lots of respect for professional video game developers, programmers, and artists. Making a good video game is hard, and takes a lot of work. You probably realize this already, but once you've tried to make a game, especially by yourself, you'll be even more amazed at what the professionals can do.

6. Folks, I realize that this game is not going to win any awards! But if I can make something like this, there's a good chance that you can too, provided that you have the enthusiasm and enough free time. Good luck! 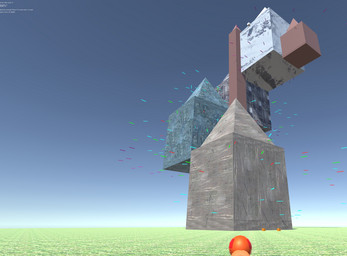 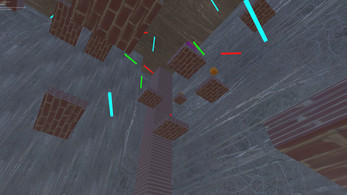 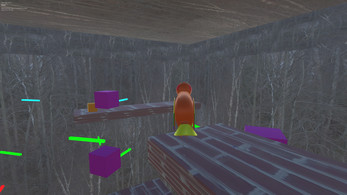